The Origin of Dorset Blue PGI

The blue cheese Dorset is one of the oldest English cheeses, for some centuries fallen into oblivion, and in the eighties exhumed by the will of a factor, Mike Davies, currently the only manufacturer protected by Slow Food.

Dorset is an English county that overlooks the English Channel, southwest of London, an area that was conquered by the Romans and where dairy farming began as early as 1800 BC. The city is well known with the local producers and Farmers Market. Dorset blue cheese, however, was only invented in the eighteenth century and its production was based on leftover milk discarded from the manufacture of butter, at the time much more in demand and valuable.

Today, skim milk is still used to obtain Dorset Blue, or at least a combination of whole and skim milk to make the cheese wetter and softer than the original hard cheese, but really very hard and difficult to chew, so much so that in the Dorset area it is commonly called Vinny or Vinney, which is the dialect word for affectionately saying “old”, “moldy”, Dorset Blue cheese is in fact a blue cheese.

It has recently obtained the PGI designation with the name of Dorset Blue Vinny. 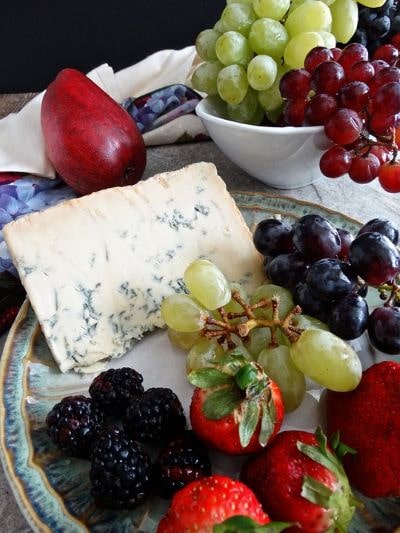 First, the cow’s milk is partially skimmed, i.e. its fat percentage is reduced to a level of 3%. Lactic ferments, Roquefort bacteria and rennet are added to the heated milk so as to obtain the curd which is cut, stirred and placed to heat for a whole night.

The next day the whey is taken from the curd and pieces of cheese are formed which will be turned over from time to time until the right degree of acidity is reached, then the drying and pressing operation is carried out for 4 days.

Salting takes place dry and only superficially to favor the development of the rind, then the cheese is left to mature for 4 weeks, after which the perforation is carried out to facilitate the entry of air and bacteria that will develop the characteristic blue veins.

The seasoning varies from 6 to 18 weeks.